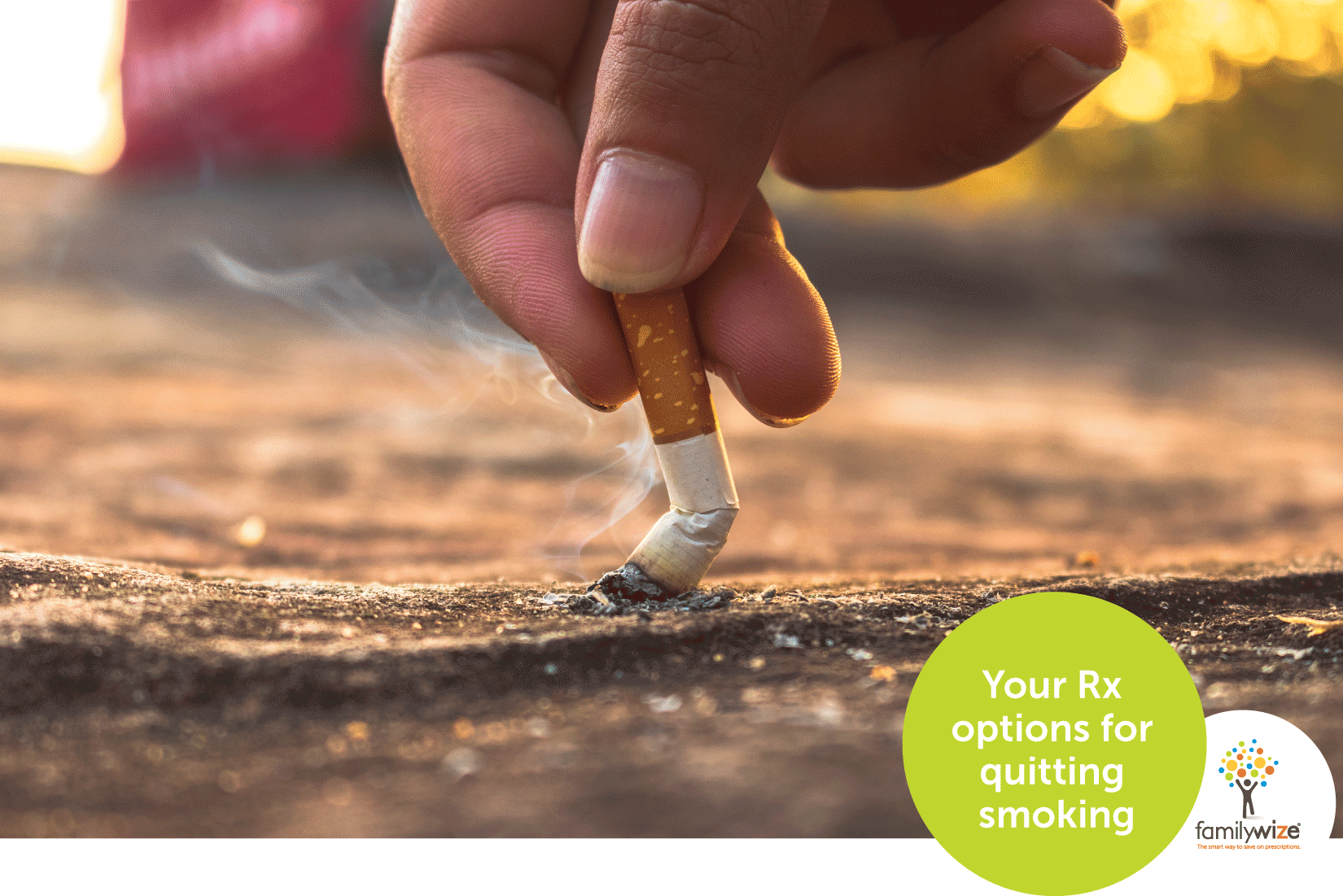 Want to quit smoking? Here are your Rx options.

If you smoke, quitting is the best thing you can do for your health. In fact, quitting might even add 10 years to your life! Don’t feel discouraged if you’ve tried and failed to quit in the past. You may have to try a few times before it sticks. But you don’t have to go it alone: There are plenty of support methods for quitting smoking including online groups, therapy, nicotine replacement products, and medications.

Using a quit-smoking product like medication or a nicotine patch can greatly boost your chances of quitting. People who use nicotine replacement therapy (NRT) products like a nicotine patch, gum or inhaler, increase their chances of quitting by 50% to 60%. You can buy some of these products at any local drug store, but for others like the nicotine inhaler, nicotine spray, and pills like Bupropion and Varenicline, you’ll need a prescription from your healthcare provider.

The nicotine inhaler and spray, like other NRTs, are meant to help control nicotine cravings and withdrawal symptoms after you stop smoking cigarettes. The idea is that you are still getting a dose of nicotine, but it’s less than what you would get from a cigarette. And as your body adjusts to less nicotine, you lower that amount even more. Bupropion and Varenicline, meanwhile, are pills that don’t contain nicotine, but counteract the effects of nicotine on your brain.

What they are: A nicotine inhaler is a device that looks similar to a cigarette and is attached to a cartridge that contains nicotine. When you puff on the inhaler, it releases a nicotine-containing vapor that you inhale and absorb through the lining of your mouth and nose. Most cartridges last for about 20 minutes of active puffing. The typical recommended dose for a nicotine inhaler is six cartridges a day for the first three to six weeks after you quit smoking. Then, gradually lessen that amount for the next several weeks. Inhalers shouldn’t be used for more than six months.

Drawbacks: Nicotine inhalers can sometimes cause mouth or throat irritation or stomach upset.

What they are: Nicotine nasal sprays are similar to inhalers except you receive the nicotine dose by spraying a liquid into your nose. The nicotine is then absorbed through the lining of your nose. The recommended starting dose is usually two sprays (one in each nostril) per hour and no more than five times an hour for eight weeks. Then, you gradually ramp down the amount over the next four to six weeks. You shouldn’t use the spray for more than six months so you don’t become addicted.

Drawbacks: Nicotine nasal sprays can sometimes cause mouth or throat irritation, including coughing and a runny nose. Those symptoms usually get better after the first week of use.

What it is: Bupropion is a pill often sold under the brand names Zyban or Wellbutrin. It’s labeled as an antidepressant, but it has also been shown to help people quit smoking, too. The medication works by decreasing nicotine cravings and withdrawal symptoms by increasing the production of certain “feel good” chemicals in the brain. Bupropion doesn’t contain nicotine, so it can be used with NRTs at the same time. Bupropion also may help with some of the weight gain many smokers experience when they quit. You should start taking the medication a week or two before you plan to quit.

Drawbacks: You have to remember to take the pill twice a day and it might cause dry mouth, headaches, or insomnia.

What it is: A prescription medication better known by its brand name, Chantix. The pill works by blocking the nicotine receptors in the brain, making it less pleasurable to smoke. You should start taking the medication a week or two before you plan to quit.

Drawbacks: You have to take the pill twice a day and it may cause side effects like nausea, insomnia, and vivid dreams.